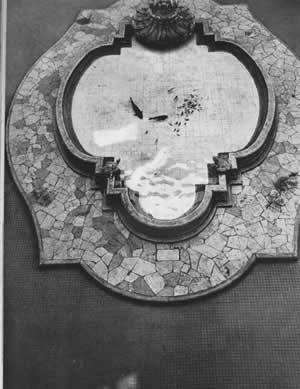 This delightful fountain, located in the courtyard of a hospital, was crafted from very minimal resources, but the outcome is wonderful!

The hospital, known by Romans, as the Fate-bene-Fratelli, meaning Do Good Brothers,  was basically rebuilt in 1934, from scratch. The hospital is located, and takes up, much of Tiberina Island, and is the oldest hospital in the world. This is no rash statement as it can be dated to precisely 292 B.C. The Romans were concerned with the duration of the plague, and sent an embassy to Epidaurus. This was a Greek City, home to the temple of Ascelpius, the god of medicine. The goal was to bring back the healing serpent. They brought the indignant serpent back with them, and the story goes that it jumped from the ship into the water, creating a nest on the bank. This is the spot where the temple was built. This church was built in honor to Aesculapius, the Roman equivalent of the Greek god.

The hospital and church were gifted an ounce of water, with half the ounce to be free and the other half against the usual payment. The friars were very poor, but it was also because they pointed out that the water was used to care for the sick that they served dutifully. In 1589, the City Authorities decreed that, “By the present decree the other half ounce is to be given to those same brothers free and for the love of God and it is ordered that the money be reimbursed to them.”

Knowing that they had the water for free, and were reimbursed for what they had already paid, the brother received a further decree, "For the love of God and for the sake of charity, let the Do Good Brothers be given a small donation and let them be granted twenty scudi in coin to bring the water to their Hospital for the use of the many poor sick and infirm they have there."

This marks the first time the Aqua Felice was taken to the ancient hospital, with the source being the water that ran from the Egyptian Lion Fountain spouts. A fountain was then built in the garden of the hospital, one that would through later alterations, come to have the boot of Italy on the bottom of its pool, after the unification of the country in 1870. The building underwent a radical reconstruction in 1934, ordered by Cesare Bazzani, transforming the area into the modest look today, with the fountain also being transformed into the harmonious and lovely arrangement of today.