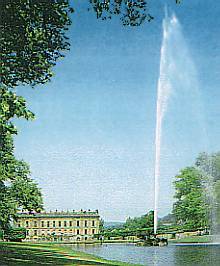 William Cavendish created the Chatsworth Gardens in the late 1600’s. It beginnings were as a grand Palladian Manor, featuring extensive formal gardens, making it one of the most splendid estates. Changes and additions, made be heirs, turned the gardens into a lavish and stunning landscape, possibly the prime example of the best a formal garden of England could be. The estate is speckled in fountains and waterworks, an important feature to Chatsworth, although not to the extreme of Versailles, for example.

There are unique fountains in Chatsworth. The Willow Tree Fountain is designed to look like a brass tree, and this “joke” tree, will actually soak passersby that stop to admire the beauty of the “tree”. A designer was paid 60 pounds to create the artificial tree. The head gardener was Joseph Paxton in 1826, appointed by the sixth Duke of Devonshire. By this time, the willow tree fountain had fallen into bad disrepair. Paxton arranged for the creation of a new fountain. The fountain was comprised of 8,000 pieces of copper and brass, with 800 jets of water that were hidden amongst the leaves and branches. The fountain was not placed back in the original location, but at the center of the ring pond, in a partially concealed glade. This artificial element became an element of an artfully arranged setting. A reservoir was dug on the top of the hill to supply water to the fountain. Interestingly, a young Princess Victoria, who later became Queen in 1837, dubbed the fountain the squirting tree.

The idea of “joke” fountains did not fade over time. James Croxton wrote, in 1862, "We were in a party of which one member was a know-it-all. When we reached the willow, the gardener, with a malicious smile, appealed to our "expert" for the name of the tree. Certainly he would just examine the formation of the leaf and be able to identify it easily. No sooner said than done. He stepped onto the grass and in that instant a thousand jets reporting their water streams upon his head. He made his escape soaking wet and drenched and ran into the bushes, and we saw him no more." The Willow Tree Fountain has been replaced two more times since this time, the last replacement being done in the mid-1980’s.

The willow tree fountain features a cascade of water that creates a splashing water display that is dramatic and exciting. The fountain was originally designed in the 1960’s by Grillet. This fountain was dug up and extended, adding a temple pavilion to the top of the cascade, designed by Thomas Archer in 1703. Paxton, in 1830, supervised the rebuilding on the fountain again, to make it more aligned with the house. A new aqueduct was also built to supply the water with fountain at this time. In the 19th century, critic Joshua Major, criticized the fountain in his book, saying the fountain was opposing the dictates of good tastes because it combined art with nature. Paxton, however, wanted to push the limits of water power, creating the garden that delights visitors to this day. The water flows in a sheet of water, over the series of elegant steps, down from the Baroque pavilion quickly disappearing into a culvert at the bottom, feeding into another fountain, the Sea Horse Fountain on the South lawn close to the house. The Gardens at Chatsworth are the perfect example of English Formal Gardens.