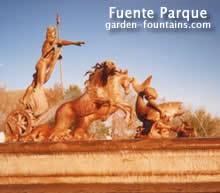 The river God Fountains were of great magnitude.  Each fountain measured four braccia, which in today’s dimensions measures almost eight feet.  They were each carved from a grayish sandstone, called “pietra bigia”.  The positions of each of the fountains are of great interest to many.  The Mugnone reclined, balancing his urn on one shoulder and resting his opposing arm on the ground.  His left leg crossed over his right while his companion figure of the Arno rested his very own urn upon his thigh while learning his arm upon the well known Florentine lion holding a lily.  The positioning of the Gods on these fountains was based on the classical river Gods of the Belvedere, Vasari added his own concept of Mugnone, which he called “Raccola in bellissima attitudine” to complete the structure of the depiction.

The modification to the classical pose is most likely due to the influence of Michelangelo’s figures in the Medici Chapel, which Tribolo had made clay copies of a few years prior.  This modification theory is backed up with proof in the discovery in the Boboli.  A portion of this relief, which once decorated the recess of the Fountain of the Mugnone, supports the hyposthese concerning the Michel-angelesque style of the status. The robust form, complicated pose, and extensive positioning of the hips and legs, turned in different directions than the head and shoulders make the connection with the city of Fiesole.  In Fiesole, a fountain boasts from the rocks with a moon under her arm, clearly displaying a betrayal of the influence of Tribolo’s great masterpiece. While many of these wall fountains followed the design type of Michelangelo, they were different in their own right because they featured a naturalistic effect from the rocky cave in which they were carved.  This rocky cave was only featured in the interior of the niche, creating a very plain look for each of the wall fountains. In the two fountains that are located in Castello, slabs of grayish sandstone form the backgrounds of the niches. The fountains were also covered with actual stalactites, a piece of the block of the Fiesole, which are often used in contemporary rustic fountains.

Three of these fountains can now be seen in the Museo Nazionale at Florence, as they have been preserved for present day viewing. Vasari spoke of “Tuscan work covered with stalactities” in a passage about fountains in the introduction to the lives.  This same section of his work discusses the types of natural stalactites used in rustic fountains.  Specific mention to different types used by Duke Cosimo in his garden at Castello were also stated, “in the rustic ornaments of the wall fountains made by Tribolo the sculptor”. Held by two Capricorns, each wall fountain featured an oblong basin decorated with garlands and masks.  Water fell from the urn of the river God and overflowed through indentations at the end of the basin, flowing through mouths of the goats. With the help from Benedetto Varchi, a scholar and poet, Tribolo created an elaborate plan to link these fountains with the adjoining ones by connecting their conduits.