The Fountain of Ceres and Its Sculptors 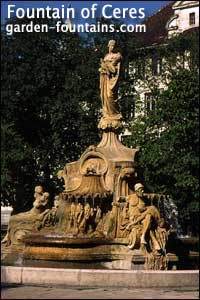 The Fountain of Ceres is one of the most visually appealing wall fountains. This water feature is said to be one of Ammannati's more beautiful works. The classical influence on the fountain can be noted, but there is also a touch of fresh Florentine charm which combined well in the water wall fountain. He used these features in the finial fountain that was located at the Villa Giulia. Two streams of water seem to go back to the work of Michelangeol's statues that were located in the Medici Chapel. In the Hippocrene, the influence of Michelangelo is very strong. It is believe that the fountains were created after 1556 as it is stated in letters from Ammannati were he was requested to create the final four statues that were to be shown to Cosimo. It is also thought that the final completion of the wall fountain took place before 1556.

A model of a wall fountain was shown to Michelangelo in 1560. The feature was higlightly thought of very highly by Cosimo, who wrote, "The model of the great hall with the design of the wall fountain of Messer Bartolommeo that goes in that place. ... As for the water wall fountains, it seems to me a beautiful fancy and that it will work out admirably." The statues themselves were then reused at Pratolino and Boboli that showed Michelangelo's interest and was also shared by other contemporary artists. The mostra in Rome, designed by Domenico Fontana, marked the entrance of the aqueduct that was created under Sixtus V. The influence of the triple niche wall fountain, Ammannati had constructed for Julius III, can be seen in the aqueduct. Although, there is a big difference in the two. The three niches in the Acqua Felice were much deeper and had an inscription that was raised up very high. There are a couple of other outdoor wall fountains that were located at the Villa d"este, Tivoli, and the Villa Aldobrandini, Frascasti.

The fountains at these located were turned back to back. An example of these water features were located at Naples and were created to look like the ancient triumphal arch, but stands by itself now. Two different Neapolitan wall fountains were of similar types but were created during the baroque period. It should be noted that these fountains were actually executed by Florentine sculptors. The fine marble that created the detail of the Fontana dei Giganti, which is now located at the Via Nazario Saui, is a silhouette against the beautiful setting of the Neapolitan harbor. Statues adorn this fountain and were created by Pietro Bernini and Michelangel Naccherino and were completed in 1601.

The round shape of the statues are often said to be from Naccherino. The central arch is ope, while the three divisions of the fountain are closed off. The actual face of the wall fountain is covered with reliefs that contain fruits of the sea. The current basin was replaced as it had once been supported up by dolphins located in the center of the arch. Statues of beautiful maidens with water spitting from their mouths and breasts. The fountain itself was dedicated in 1606 and letters show that the sculptor was Michelangelo Naccherino and Tomtnaso Montani.