Tribolo's Wall Fountain of the Labyrinth 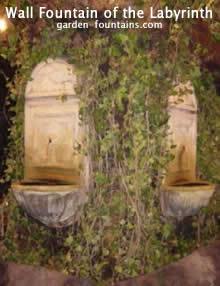 Predating the seated river Gods on Giovanni Bologna’s Fountain of Oceanus in the Boboli Garden, these wall fountains were most likely created with Bologna’s fountains as a prototype.  Construction between the years 1567 and 1576, the young Fleming created the figure for Tribolo’s Wall Fountain of the Labyrinth at Castello and must have known about this figure that adjoined Villa Rinieri..  He also created the bronze birds in the grotto of the villa. The seated posture of Tribolo’s figures was most likely adopted because it would fit in a narrow niche. In the creation of this new seated figure, suggested by Michelangelo’s frescoed Ignudi, Tribolo set the precedent for a new concept of the River Gods.  This created turbulence in the stream instead of a solid stream.  Coping the position of the urn, Givanni Bologna transferred the theme from the wall fountain to the freestanding style.  He created his own take on the statue by using download lines rather than upward and outward lines used in the earlier statue.

Professor Antonio Munoz, contrasted the figures of Boboli with Bernini’s famous river Gods on the wall fountain in the Piazza Navona in Rome.  He found that their statues boasted clam characteristics instead of loud characteristics of baroque statues. The Corsini river God, despite its early creation date, begins to expose a degree of excitement in the era of baroque creation.  The figures of the Tiber and the Arno, created in the “loggia”, also known as the second court of the Villa Giulia at Rome (1550-1555), Bartolommeo Ammannati chose a more stationary seated pose that featured horizontal lines in the rectangular niches which were unusual for his typical classical design. The river Gods were carved out of perpino and against a stucco background of rocks and vegetation.  The Tiber features a Roman wolf and the Arno with the typical Florentine lion, holds a cornucopia symbolizing plenty.  Water flowing from their urns into the marble trough like basins, born out of the classical design, are decorated at the angels with harpies.

Varsari’s description of the Tribolo’s Arno wall fountain and Mugnone wall fountain expressed the figure and motif we have discussed. The many niches and ancient sculptures found in the court are a clear example of Tribolo’s design for the wall fountains of Labyrinth at Castello.  The free form in the plastic peprino is noticeably expressive in the flow of the streams and lends us to believe that the sculptor was influenced by the figure of Marforio, rather than the typical ancient river God.   It is important to note that it is quite unusual to find a wall fountain of the Cinquecento preserved and in tact with figure, niche, enfacement, and basin in good condition.  The great courtyard of the Palazzo Nonfinito in Florence is a great example of this.