Before the Four Rivers Fountain 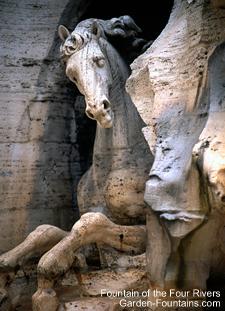 In the center of the Piazza Navona, it was said there was a round fountain that existed before the current Four Rivers Fountains. This is not the case. All that existed was a rectangular trough. It was plain and undecorated, brought to the square  circa 1575. The purpose was to bring drinking water for horses, and that was its only purpose. In 1635, Jacopa della Porta had the idea of  decorating the trough with a  huge statue of Marforio, but this never happened.

Possibly because in 1589 an announcement by Sixtus V wanted to create two beautiful spires in the piazza di Agone, which were presently in ruins outside of Rome. He wanted these obelisk to be the center of the fountains. The simple trough stayed in its place though. In 1623, Pope Urban VIII placed Bernini in the role of Commissioner of the water for the Piazza Navona. As a result the trough, as well as the two fountains by della Porta came under the direct scrutiny of the creative and imaginative eye of Bernini.